Rhubarb plants are grown in gardens mainly for culinary purposes. It also has medicinal properties. Few people know about the uses of these plants.

It’s very bitter to taste. So, most people prefer to add sugar to it while cooking.

What’s wrong with my rhubarb?

Rhubarb may face a variety of issues. Leaves become yellow and red. These are the most common issues that bother a Rhubarb plant.

Weevil infestation and aphid infestations are commonly seen in rhubarbs. Aphids make way for other infections.

Let’s look at each of the issues based on the signs. You can jump to the appropriate issue using the table of contents above.

This is a common disorder seen by many gardeners. The leaves become yellow and wilted.

This problem is mainly caused by overwatering. This is also seen when the plant is in poorly draining soil. Either way, it is linked to water.

Try to water just enough. You don’t want to overwater the plant.

Lack of water also can cause the leaves to wilt and yellow. Water your rhubarbs every other day if you are in warmer regions.

Tip: Water it only when the top inch of the soil is dry. You can check for moisture with your fingers.

The Rhubarb plant will be most productive in winter temperatures, i.e., below the 40s.

If the plant gets too much heat, the leaves get wilted and become yellow.

How to fix: Try to give your Rhubarb plant some shade. You can do so by installing a shade. A roll-up blind works super well as it gives partial and indirect sunlight to the plant.

The leaves become yellow to red and fall off. This is a deadly disease. The crowns exhibit a brown-black decay.

The smaller feeder roots are usually present but decay once this disease attacks. Big brown-black holes are seen in the larger roots.

Purchase or acquire healthy Rhubarb healthy plant stock for propagation. This is the best way to avoid running into this issue.

Can Rhubarb recover from Crown Rot?

There’s not much you can do once the disease shows itself. You just need to get rid of the affected plants.

Dispose of them as early as possible. The disease will spread in the vegetable bed. 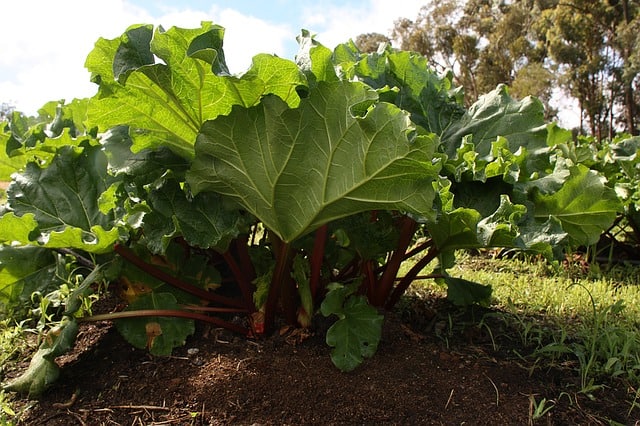 Rhubarb leaves turn due to many reasons. They show these symptoms when infected by bacteria, fungi, or viruses.

Let’s look at each of these diseases.

If the whole leaf or few leaves turn red, then your plant is infected with the bacteria Erwinia rhapontici.

Signs: The entire leaf turns red, the crown and the roots get rotten. The frilly red leaves may look pretty, but it’s an early sign of the infection.

There’s not much you can do to the plant once it’s infected. You just need to get rid of the infected plant.

Do not plant another plant in the same place. To prevent the bacteria from spreading to other plants, you may need to control the insects.

Two fungi, Ascochyta and Ramularia are responsible for leaf spots with red margins. You can harvest the stalks if you catch the infection early.

A plant infected with these fungi will eventually die in one or two years. Aphids are responsible for spreading the fungi, so controlling them would help greatly.

If a plant is infected by the Turnip Mosaic virus, then the leaves will turn red. This disease is often confused with the Erwinia red leaf.

The disease spreads via aphids. There’s not much you can do once the plant gets infected.

Why is my Rhubarb wilting?

Sometimes people observe that their rhubarbs go yellow and wilt. The spaces between the veins become yellow.

This is caused by iron deficiency. You can treat such plants with Iron Chelate 7% and see if the plant recovers.

Alkaline soil conditions, poor aeration, or overwatering can cause the rhubarb leaves to wilt.

Soil can be improved by adding sphagnum peat or organic mulches. These will lower the pH efficiently.

Why are my rhubarb leaves full of holes?

Do you see holes on the leaves and stems of Rhubarb?

It is probably caused by a weevil infestation. Rhubarb curculio, a weevil loves to munch on the leaves leaving numerous holes.

How to fix: Add Diatomaceous earth to the soil around your plants. This helps prevent weevil and other bug infestations. If the plants are already infested, spray Neem oil on the affected parts.

Why is my rhubarb thin and spindly?

Do you see thin and spindly stalks in your rhubarb plants? Rhubarb plants produce such stalks for 2 years. This is their establishment period.

You may see in some of your established plants. This happens due to overcrowding. Poor plant vigor may also cause this.

How to fix: This problem can be solved by dividing the rhubarb plants and planting the stalks elsewhere.

Tip: To make the rhubarb stalks longer and thicker, cover the plants with a bottomless cardboard box in the early spring. The stalks will grow longer as they reach for more sunlight.

Why are my Rhubarb leaves curling?

This can also happen due to micronutrient deficiency. So, diagnose the issue and fix it accordingly.

Who wants to run into such issues?

If you maintain the rhubarbs well, you will not see any of the above-discussed issues. Let’s see how to care for rhubarbs.

Does Rhubarb need a lot of water?

Keep an eye on the soil. You don’t want it to dry out completely. Water it just enough when needed.

How often do you water rhubarb?

Rhubarb needs a lot of water in the first two years of growth. A good rule of thumb is to water when the top inch of the soil is dry. Check the soil with fingers.

Can you Overwater Rhubarb?

Water regularly but do not overwater! The crowns can rot in soggy soil. Water only when needed by checking the moisture with fingers.

Overwatering can cause a lot of issues. So, water regularly but consciously.