Jimson weed which is also called Thorn apple belongs to the genus Datura. It’s an aggressively invasive and poisonous plant. It grows widely in temperate regions.

It is an annual weed and is competitive with many garden plants. You wouldn’t want this weed in your garden as it’s proven to be poisonous to humans, cattle, and pets.

Let’s see how you can get rid of this weed.

I advise you to wear protective clothing before you even touch this plant.

Going the organic route is quite hard and takes a lot of time.

Wear a pair of garden gloves and protective eyewear and clothing that covers your body entirely if possible. These precautions are necessary as jimson weed has been proven to irritate eyes and skin.

Pull the jimson weed out of the soil along with its roots. Throw it in a sealable trash bag. The weed is easier to pull from the ground if you water the soil well a day before.

Do this weekly if you want to have a landscape free of these monsters. You can use a weed torch or a digger, but make sure to get rid of them as soon as they sprout.

Do not let these plants flower, if they do they’ll soon release seeds into the soil and you’ll be fighting them for years.

If possible, mow the area regularly/weekly to keep the weed from flowering.

You can plant a cover crop that prevents the germination of any seeds already in the soil. Sudangrass can be a great cover plant as it is known to prevent weeds from sprouting.

Jimson weed is allelopathic, so it’s better to plant fully grown plants instead of seeding.

Use it as compost

It grows aggressively and if you keep plucking jimson weeds, you can use it to make compost. Jimson weed decomposes well and it is completely safe to use its compost.

Whenever you pull out jimson weed, throw it in a sealable trash bag. You can now use it in your compost mix.

You can solarize your garden beds to prevent any jimson weed from sprouting. This usually takes 4 weeks to 8 weeks. But this works well.

It is a tedious process if the problem is on a farm. In such cases, herbicidal control is apparently an efficient option.

Using herbicides to eradicate the jimson weed is an efficient way to do it. Spring is the best time to spray herbicides when the weed is actively growing.

Once the jimson weed is dead, you may need to use a pre-emergent to control new jimson weed sprouts from the soil.

Note: After pulling it out manually, you may need to use a pre-emergent herbicide on the soil. 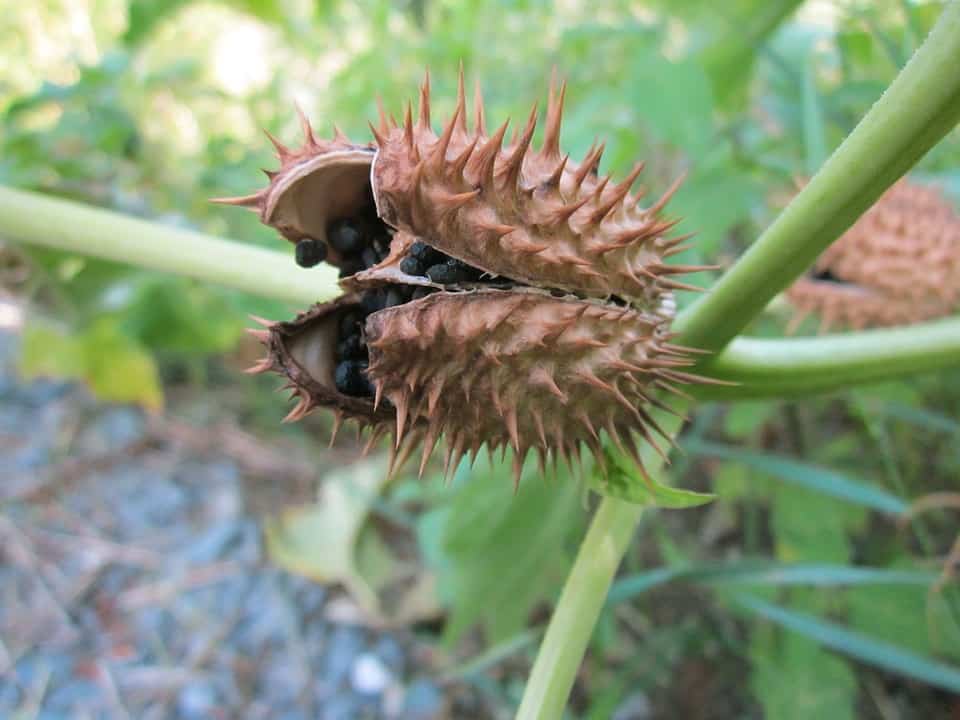 Is Jimson weed poisonous to touch?

Touching the jimson weed or smelling it is poisonous to humans and animals alike.

Is Jimson weed poisonous to dogs?

Yes, jimson weed is proven to be poisonous to pet dogs and it is best to keep your garden/lawn clear of this weed.

Is Jimson weed poisonous to cattle?

Yes. Jimson weed can be poisonous even fatal to cattle. Horses and cows were poisoned by this weed many times in many areas of the US.

Does jimson weed cause a rash?

Jimson weed causes rashes and it can cause respiratory issues if smelled. That’s the reason why you should always wear protective clothing when dealing with this weed.

How does jimson weed poison you?

If poisoned with jimson weed, it can cause hallucinations, respiratory problems and if seeds/flowers are ingested, can even lead to fatality.

Is Jimson weed the same as Moonflower?

Jimson weed and moonflowers are different plants. Let’s see how we can differentiate them from each other.

I wish you a jimson weed-free garden!