Capeweed is a notorious weed that invades pastures and lawns. It spreads quite aggressively as it produces thousands of seed which get settled in the soil.

It is harmful not only to your lawns but also to animals that depend on pastures for their food. That’s why it becomes crucial to identify them as early as possible and get rid of the weeds.

Capeweed is an annual. These weeds became quite invasive especially in parts of California.

You need to understand the weed’s lifecycle before you even think of eradicating it.

These weeds look like daisies as they belong to the same order. These germinate in autumn and grow into a rosette of leaves.

Rosette of this plant resembles that of storksbill, crowfoot, or bittercress. It can be differentiated from the others by the undersides of the leaves which are whitish and covered in a mat of short hair.

Flowers are daisy-like with a black colored center. These weeds bloom in late spring and early summer. The flowers fall off in late summer.

I’ve seen many people confusing capeweed with Flatweed and vice-versa. This is because they look alike.

Here’s a video where Amy shows the two weeds and differentiates them.

You must be able to differentiate them to successfully eradicate the specific weed that haunts your pasture.

Is Capeweed bad for Cattle?

Capeweed is pretty bad for farm animals like cows, buffaloes, etc. You must try to keep this weed away from your pastures.

Eating a small amount of this weed may not harm the animals.

Intake of capeweed rich in nitrates often taints the milk. If they eat a lot of capeweed it will cause nitrate or nitrite poisoning in them.

Even horses can be affected if they graze a pasture invaded by capeweed. Do not release them into capeweed affected pastures when they’re hungry (They’ll then eat a ton of the weed!).

Make sure you don’t overgraze your pasture, it is the reason why capeweed flourishes.

Overgrazing removes other plants/grasses and gives space for capeweed to thrive. Rabbits have been seen overgrazing in some pastures.

It is important to know how this weed spreads as you want to eradicate it. It’s especially important as these seeds are inconspicuous.

Capeweed seeds travel places with the help of birds and animals.

They release thousands of seeds, so it’s better to pluck them out before they even flower. These seeds also spread through contaminated soil.

You need to make sure you properly wash your boots, clothing before you walk into an unaffected lawn/pasture.

I am a huge fan of the biological control of weeds. I do this type of weed control in my vegetable garden and I recommend everyone do this.

It’s good for the soil and good for the people who eat those vegetables. So how do we control these nasty weeds naturally?

I have 20 chickens in my garden, they roam the garden for a while every day.

There’s a patch of capeweed in my garden that’s visited by the hens once in a day. They’ve been munching on the weed for ages now, they are completely fine. They clear the weed for me.

If biological control is not an option, you can always go the organic/natural route. Here are a few ways.

Will Straight Vinegar Kill these Weeds?

White vinegar is another way to get rid of those pesky weeds without using herbicides. The best way to use it seems to be by adding salt to it.

But, is salt good for your soil? No. You don’t want salt anywhere near your garden beds.

I’d not use vinegar and salt mixture to kill capeweed in the garden. You may use it if you have the weeds in your pasture.

Boiling water is quite useful to kill weeds as it is a completely natural way.

Heat some boiling water and transfer it to a tea kettle with a spout and handle.

Now you can spot-treat the capeweed with boiling water without spilling any on the surrounding plants.

Make sure you cover your body well before doing this. Wear some gloves and boots.

Plucking ’em out by hand

Another very good way of controlling these weeds is to pluck them out by hand.

This is an underrated technique of weed control, but it works well if there is a weed problem in your garden. Pluck them out before they even flower.

It becomes easier to pluck ’em out if you loosen the soil with a fork or water the patch a day before. 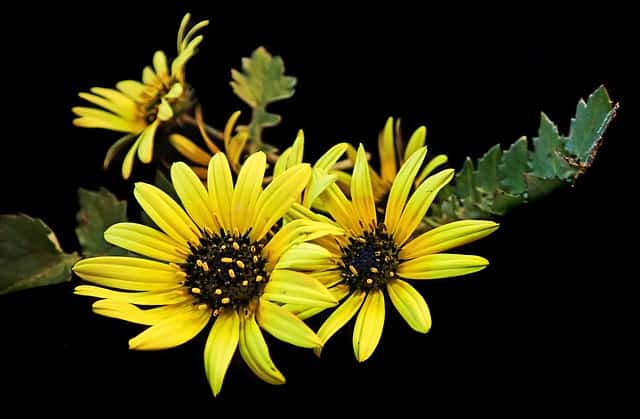 Herbicides should be your last resort when trying to eliminate weeds in your garden. I don’t like to add chemicals to my garden soil unless it’s absolutely necessary.

There are many herbicides in the market that sell themselves as capeweed eradicators. Let’s see which herbicides work well on Capeweed.

Yes. Two variants of Roundup can kill the capeweed efficiently. Let’s look at the spot-spray application of Roundup. It is best used near waterways that are beside pastures.

Spray more on weeds that are over 15cm in height or diameter. The capeweed will be killed in 3-7 days.

Spraying instructions are the same as the Biactive™ and you’ll see desired results in 3-7 days.

Roundup is a non-selective herbicide and will damage any plants around this weed. So, it is advisable not to use this in gardens, only in pastures.

This herbicide comes premixed. Do not mow or fertilize for at least 7 days after spraying this. Complete eradication may take up to 3 weeks or more.

Roundup is a non-selective herbicide and you might not want to use this in the garden.

Let’s look at a selective herbicide for your lawn and garden.

The following herbicides will kill capeweed but leave the surrounding plants unaffected.

The best time to spray is autumn and spring when the grass and weeds are actively growing.

Selective herbicides are super useful for gardeners. They are like assassins paid to kill the weeds, just the weeds!

Weed weapon rapid action is a selective herbicide that acts on capeweed alone.

It is quite useful as it acts well on the broadleaf weed but becomes inactive in the soil. Spray it in autumn and spring when the capeweed is quite active.

When should you spray Capeweed?

It’s always best to spray herbicides when the weed is in the initial stages.

The best time to spray them to death is early autumn.

They can be sprayed anytime though. You wouldn’t want these weeds to flower and throw thousands of seeds around.

It’s no point spraying the weeds once they flower as they die soon anyway and before dying they release thousands of seeds into the soil.

Spray herbicides only when there’s no rain forecasted in the 24-48 hours.

Rain might wash away the herbicide and our efforts go in vain. broadleaf herbicide capeweed, when the weeds just started growing.

You read up to here, you must think of capeweed as evil. It does bad to your cattle only because it’s high in nitrate.

Capeweed can be added to compost, it adds tons of nutrients to your compost and it’s completely safe.

How to prevent a capeweed invasion?

I always advise preventing weed growth rather than spraying them with chemicals. These chemicals hurt the soil.

I wish this article was helpful to you. Feel free to contact me if you have any questions regarding weed control.

While you’re here read my article on jimson weed control.